When it comes to above ground pipework, power stations have a unique combination of density and individuality. What does this mean?
Density means there are a lot of pipes per m3 compared to other buildings. As a result, a project with a small footprint that may be a small job for a roofing company, is nevertheless a large-scale piping design and installation challenge.
Individuality means, in this context, that there is a variety of pipe dimensions, temperatures,  materials and combinations that one would struggle to find anywhere else in construction. If your concept of industrial pipework is a bank of several pipes, sitting in regular intervals on a steel structure, forget this in a power station. You will not find such level of repetition and simplicity here.

These are the main services you can find in a Power Station that require the design and installation of Pipe Supports: 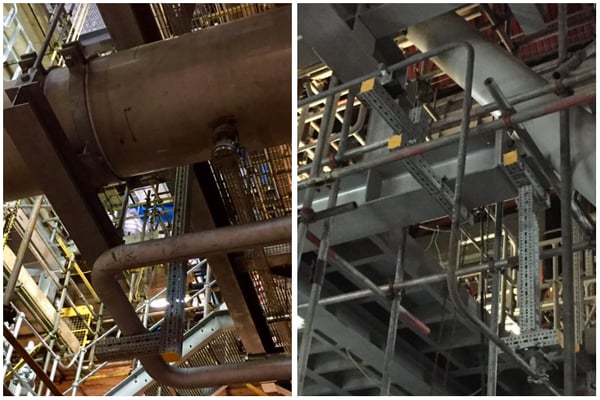 Piping professionals in the Power Engineering industry distinguish between:

The first subject, apart from some potential to improve details, can be considered sorted. There is a global manufacturing industry offering engineered hangers and supports, including ourselves at SIKLA, with standardised and approved products that are not only available as the actual product but also as CAD blocks integrated into libraries or even plug-ins.

For this reason, ‘secondary pipe supports’ have for long remained an outcast in a world where everything else turned into standardised products, supplied by globally available mass producers. Secondary pipe supports have been a text book example of what the saying ‘re-inventing the wheel’ means: time after time piping designers invented something new, just to integrate a pipe of a specific temperature and dimension into a building of a specific architecture.

This was until siFramo became available!

Leaving power engineering projects aside for a moment, the siFramo products’ efficiency increases with two factors:

The above means that the closer you get to 100% variety of steel frames that are simultaneously short and have many branches, the more economically wise it is to opt in favour of siFramo. Likewise, and in all honesty, the closer a pipe support requirement is to 100% geometric uniformity whilst simultaneously having hardly any branches per metre steel section, the more likely it is that good old fashioned welded steel is the best option.

1. The characteristics and the simplicity of the product’s design that guarantees a uniform and reliable quality when using yet unknown sub-contractors to install, or even fabricate, the supports

2. The availability of plant software plugins that not only allows detailed piping design based on the details of the siFramo product, but even improves the design process’ efficiency by making it easier than designing conventional steel supports

3. The service package that the product is imbedded into, which allows the supports to be ordered exactly as fully fabricated as traditionally expected and as transparently calculated against a rate per kg, making this product in the first project a ‘known unknown’ rather than an ‘unknown unknown’.

Above: whoever makes a frame from siFramo, the quality will be reliably good – software plugins allow for detailed planning

The main power station components ‘Boiler’ and ‘Turbine’ have traditionally always required the detailed design of pipe supports. The same applies to the ‘Water Steam Cycle’ (WSC). High temperatures and 24 hours system operation in the future are too high a responsibility to be relaxed about this detail and to squeeze it into a future sub-contract’s small print. Therefore, these are the areas on the mechanical side of power engineering where all benefits from our siFramo system apply:

On top of this there are the general benefits of the system itself, such as significant weight reduction, ease, and speed of dealing with modifications, instant availability with full corrosion protection.

Finally, there is the Balance of Plant (BoP), whose mechanical side comprises instrument and service air systems, hydraulics, and heating and cooling systems. From the engineer’s perspective this would be called ‘General Piping’. Even a power stations is, after all, just a building.

The biggest difference to the main components referred to above are, in terms of the usage of siFramo, that General Piping’s support design is not considered as safety and system relevant, therefore often an ‘on-site design element’ to be resolved by sub-contractors under time pressure. We have observed a trend in recent years, that bigger clients migrate this subject into the detailed design phase but, in reality most BoP pipe supports in the world are being built tomorrow based on what was concluded to be the demand today.

Should siFramo be used for mechanical services in your next power engineering project?

Given the number of such projects the system has already been used in, this is the wrong question. The right question is: where should we start using it?

At Sikla we understand secondary pipe support design is entrenched in the tradition of a complex planning process that varies from client to client. However obvious the benefits might be, switching after nearly a century of welded flanged steel design to a perforated Meccano style system is not a quick and not an easy decision for any client and for any project management team. However, the variety of main and auxiliary components within one power plant project bears the opportunity to try and learn. Perhaps the system has already been used in your last project and you are just not aware of it?

My recommendation:
Approach it like changing your fleet from fossil fuel to electrical vehicles: step-by-step. However small the first step, it is better than ignoring a trend that has become stronger and more widespread over the last ten years.

If you are interested in learning more about the system contact our team for further details. Maybe you can then consider including siFramo in the project you are currently working on! 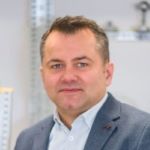